Imagine getting dropped off of a bus in a small town only to find there’s 5 more kilometers to walk through marshy conditions in the dark. The door is opened to a small room lit with a candle and the blue static glow of an old TV in the corner.

Henry hasn’t been home for awhile, so he immediately tends to the things that need to be fixed. Pulling out a roll of red electric tape he begins to adjust the wires until a static black and white image appears. Next he props a stool on the coffee table in order to reach the one solitary lightbulb hanging from twine in the exposed rafters.

The light never came on so we ate our dinner of chicken and ugali by candle light. It’s custom to feed guests chicken even when it exceeds their budget.

The mother and children don’t eat with us. I’m not sure where, when or what they last ate. We’re served steaming chai after dinner made from their own cow’s milk. Water is passed to wash our hands and then we sit and talk for the next few hours.

I already had a small boy asleep in my lap and the other children gathered tightly around as I scrolled through the pictures from my trip. They were mesmerized and Henry said that was the first they’d seen touchscreen technology.

Finally they brought me some blankets and a pillow to spread out on the small couch. My legs were too long so I stretched them through the ends and let them hang as I fell asleep to blaring Lou music. Kenyans love their music.

My sleep was restless as I pondered what I’ve experienced so far. The children smelled of urine and dressed in rags worse then I use to clean my floors.

I woke just before 7 to a bright light in my face. The door had been opened to let the chickens go outside and I could see the cracking mud walls and dirt floor.

I doze off till I’m awakened with word that the cow is being milked. I had asked the night before if I could watch. I quickly pull on my shoes and step out in the mud to watch as mom milks an utter I wouldn’t have even noticed it was so small. The animals are severely malnourished and underfed.

After she gets what she needs for that day (no more then a quart) she releases the calf to strip what milk is left. My heart broke to see how the hunger is distributed between animals and humans alike. There’s simply not enough.

We’re served more delicious chai and a few slices of plain white bread for breakfast before we set out on the same 5 kilometer hike we had done the night before. This time in the light and dryness of the noon sun it was a much easier trek.

We made many stops on our way to and in town visiting various people who have experience with drilling wells in the area. We also visited a few greenhouses to get an idea of the earning potential this project could provide the local community.

On out way back just before dark we heard the statistic of an average family’s income per year in the village of Rakwaro. The answer was shocking and brought a lump to my throat. It is equivalent to $720 per year. That’s less then one months rent back home. How can this even be possible?

This family has 4 children and one more that is adopted. If I ever lose ambition for this project to help empower this community with earning potential there would be no hope for me. I’m truly moved to the core. 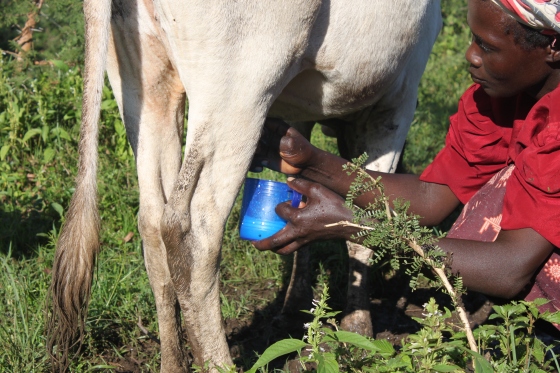 12 thoughts on “The Village”